I watched Ninotchka the other night for the 2nd time ever (the first was in December when I managed to escape my exuberant family and the Christmas festivities). Ninotchka was, as expected, delightful. But in this second viewing I had a revelation. and came after a week full of watching silent and early sound films (I just found out my library has this box set and it is the most wonderful problem). What I didn’t realize at the time was that having the remnants of the silent/early sound film techniques such as lighting or the use of the actors bodies and faces to communicate with the audience, would effect my viewing experience. But it absolutely influenced how I viewed the film and gave me some interesting ideas.

I already knew Lubitsch was a genius and that I loved his films, but I realized a large part of that is because of the techniques he learned from silent film, i.e. his lighting, letting the audience fill in the blanks, and the body language/physicality of his actors (not relying on the words).

In Ninotchka, the punch line of a joke is often a look from Garbo or some other physical movement, not necessarily a line. This is most obvious in two of my favorite scenes from the film: in the cafe, when M. Douglas’ jokes fall flat with her, but then he accidentally falls over in his chair (functioning as the punch line to the scene) and she starts laughing. (the marketing point of the film: “Garbo laughs!”)

When they are drunk in the hotel and she has to be “punished,” so she is blindfolded, lined up against the wall, and “shot” by the sound of champagne being opened.

Following in a close third, is when Douglas is on the phone and she walks into the frame, writes down her name, and walks back out of frame. The punch line is his face as he realizes who she is.

By seeing the punchlines, we are visually engaged and the comedy never feels like it is happening too quickly. In films like His Girl Friday, or a Marx bros. film, the verbal barrage of jokes is almost too much to keep up with. But the physical punchlines of Ninotchka give the comedy a natural and steady pace so it never feels overly deliberate but it just a pleasant surprise.

Something else I noticed was the use of the little eye lights, which are basically the lights they shine right in the actors eyes to make the actors look all pretty and in love. Oh wait, I know the perfect example. Those lights/eyes.

We don’t really get those with Garbo. Her eyes are either partly closed, or she is looked down (example in the picture above, when they are in the cafe), and when we do get the lights, we get flickers here and there. Her eyes only truly “light up” after she is in love with M. Douglas and is looking right at him.

On the other hand, the lights in his eyes as big and bright as Judy’s are in this scene singing Merry Little Christmas from Meet me in St. Louis. Whenever he is talking to Ninotchka or about love his eye lights are there. Even before she has started to soften and fall in love with him. In fact, because his eyes are so open and looking intently at her, he looks a bit crazy.

But we have no doubt that he is in love and/or obsessed with her. M. Douglas is also as brightly if not more brightly lit than Garbo in the uptight Ninotchka scenes. Then they are more equal once she has softened.

And here is my possibly (probably) crazy theory about this. Lubitsch is giving us some important and extremely subtle gender info through lighting. By giving Douglas the more “I’m hopelessly in love” lighting and eyes, and Ninotchka not so much, he is supporting both the characters and using lighting to show the changes in those characters. It is only when Douglas is talking of love and Ninotchka looks up into the distance (even though she is still practical Ninotchka) that we see the lights in her eyes for several moments.

Ninotchka will not acknowledge love, she is too practical, she should not having lighting on her that says “I am a beautiful woman and I am in love.” But by giving Douglas that lighting, we have a little gender role switch here, which fits perfectly with the characters as well as their physical positions/movement in the scene.

Ninotchka is much more dominant and Douglas is in la-la land, not only in their manner of speaking but in the lighting as well. While Douglas and his crazy in love eye lights are the first part of the initial gender switch, another gender switch indicated b lighting happens when Ninotchka decides that she wants to be a woman and not just on a mission. Suddenly she is lit like a beautiful woman, hair with highlighted with a glow, a softness to the scene, and her own eye lights.

After this shift, more obviously indicated by her purchase of the ridiculous hat, we are brought to the type of romance and gender roles we know.

It is not until later, when Ninotchka is on the plane back to Russia that she has the most brilliant lighting yet in the film, the quintessential Lubitsch, “I’m in love” glowing face and eyes. 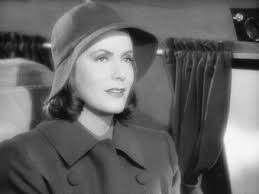 But in the parade she marches in back in Russia, there is (in the literal sense) no light in her eyes (which for once we can see).

Now, if this were pretty much anyone but Lubitsch, I wouldnt know if this were just coincidence or not. But Lubitsch knew how to make it a scene look and play just the way he wanted, and he knew how to use lighting. So I must conclude that everything we see was deliberate and very carefully crafted.